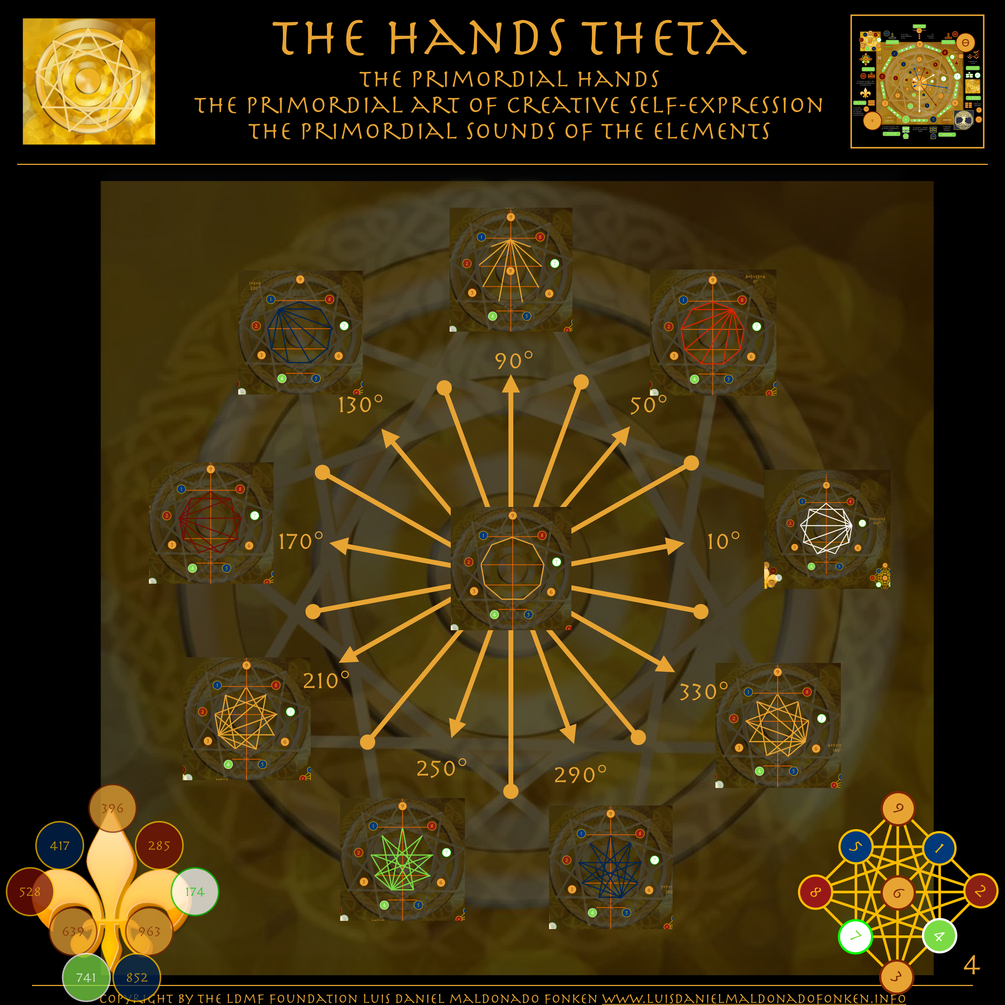 In the booklet a new perspective is suggested for the study of the 9 elements and 9 stages of development. As well a correlation is suggested, between them and the human fingers. By the application of primordial vectorial math, the researcher suggest an hypothesis related to human hand digits and frequencies (Hz) and the possibility to study the 9 elements (systemic organization of human phenomena) through frequency. In the booklet the researcher will give as well references to scientific studies on the hands, brain and human development, and give references to the knowledge of the human hands and ancient cultures for preventive health, conscious sexuality. By the application of primordial mathematics theta, and the model described in this book, the researcher suggests the practice of hand reading, based on the knowledge described in this e-book. The researcher integrates Primordial Technology Theta Methods, and utilizes the digits(fingers) of the hands as symbols, that represents the 9 elements and the 9 stages of development, the 9 cyphers that describe human phenomena. (REF: "The 9 elements & the heart, systemic perception tool. The 9 stages of development, human potential studies. Primordial Vectorial Mathematics, publications by the same author). OVERVIEW: This booklet intents to be simple and to create a question, an additional question: what is a hand for? In the field of modern science the hand has been studied: humans have five digits, the bones of which are termed phalanges. there are 4 phalanges that construct a digit or finger, connected to a fifth region named carpal. ( distal phalanges, intermediate phaLanges, proximal phalanges, metacarpals, and carpals) Digits or fingers are important for creation, sensing, communicating, self-expressing… the activities individuals engage into with the hands are correlated to a unique brain activity. Each finger has an orderly somatic representation on the cerebral cortex in the somatosensory cortex area, and representations in the supplementary motor area and primary motor area. The fingers of our right hand are controlled by our Left brain while the fingers of our left by the right brain. Right hand fingers vs brain activity correlation: thumb: management, judgement; pointing finger: reasoning, concept perception; middle: perception stimuli, control ; annular: language, music; little finger: observation, reading. Left hand fingers vs brain activity correlation: thumb: leadership; pointing finger: imagination, reasoning; middle finger: movement; annular: sound, language; little finger: recognition, visual. (Modern scientific studies) Ancient cultures did for example associate the fingers to the elements, or to organs, as for example in the traditional chine medicine, shiatsu, accupunctur, jin shin jytsu, and others. but in general, we can tell, that without the hands human creations would not have been possible. thanks to the hand the human civilization has been evolving, and why? the use of the hand have helped the human brain to reach new levels of complexity. If a hand would be studied from the systemic perception tool of the 9 elements, 9 stages of development, which would be the results? this publication is dedicated to the hands and to create a new perspective of the human phenomena through the integration of the hand and the 9 elements perception tool created by the author. As well the primordial vectorial math will be applied for the study of the ambrosia theta, in relation to the fingers. digits, and cyphers. the generation principle, and frequencies of the class of phenomena associated with each cypher or element. for the description of the hand, the degrees of inclination of the fingers will be suggested as pointing arrows or vectors in the direction of the vertex of the boric star theta, symbol at the upper left corner of this page. in principle, the digits or fingers will be associated to the cyphers that represent the 9 classes of the elements, 9 classes in which human phenomena has been organized.as for the human potential studies of the author, published in previous publications, the 9+ stages of development will be mentioned the same that have been studied in the publications on the primordial archetypes by the same author. The author has explored in meditation, yoga, martial arts, performing arts, conscious sexuality, preventive health practices, perception, emotional intelligence, awareness, on the 9 elements. With this publication a correlation of his previous studies, and training programs is now being made in relation o the hands, its digits, its phalanges and carpal, and to the palm of the hand, including those studies related to the use of frequencies or sound on each finger. references to the art of reading hands, preventive health practices and conscious sexuliaty will be also made in the last chapter

See it in your library

View in Library
Sorry, this item is not available in your location.
Sold out, please go back and pick another option.
This product is not currently for sale.

Your purchase was successful!

We charged your card and sent you a receipt

Good news! Since you already have a Gumroad account, it's also been added to your library.